After a few start and stop efforts trying to get this blog up, I scrapped all the other words I had written in favor of brevity. A picture is worth a thousand words, they say, and I think this pretty well sums it up: 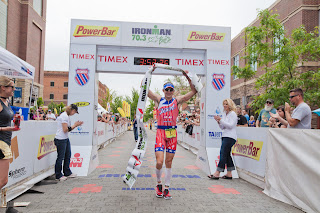 The biggest feeling after winning one of my favorite races on the circuit is gratitude… I know I could not do this without the wonderful people who surround me in this sport, so this one is for you. From the incredible support I enjoy from my sponsors, Zoot (wetsuit kept me warm, shoes carried me to victory), Specialized (Shiv rocketship), Clif (fuel for the day), Zipp (ridiculously fast wheels), SRAM (smooth shifting), FuelBelt (Revenge R20 on the run), Wattie Ink (carrying my bike up the hill and getting me interviews on the radio and television), and TriBike Transport (hassle free bike travel), to my family and friends, Tom Robertson for the great photo, Sue and Jay (perfect latte, man!), Dave and Jen for their warm hospitality (and plentiful beer), and the entire community of Boise who came out and gave their energy to the event… I say a big THANK YOU for making it one of the most special race weekends of my career.
The other part? I swam pretty well for me, biked like a man possessed, and kept ‘er in second gear for the run as I soaked in the scenery and finally chased down the elusive victory on the Boise Greenbelt…. I feel happy.