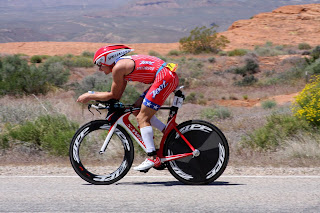 It has been a little over two weeks since I put myself through the most grueling Ironman on the circuit for the second time in two years. I had hopes of getting this blog up immediately after the race, but I’ve been enjoying some slow and low days of recovery, clearing my mind of the triathlon world a little before beginning my next build.
St. George holds a special place in my heart. I first spent time there as a member of the University of Montana triathlon team in 2004, doing a spring training camp before our National Championship race in Lake Havasu that spring. We came back again in 2006, and then I returned last year to train on the course and race in early May. It’s a fantastic venue with amazing community support, and I am guessing that it may be the most honest Ironman on the circuit, with incredibly challenging bike and run courses. There is nowhere to hide in this race… the strongest athlete wins.
My goal for the race was to win, and I believed it was possible after a hard-earned second place in 2010. My spring training was not perfect, but it was very good, and I toed the line with confidence that I could execute a race capable of taking the top spot.
The swim started out like any other, with the top swimmers pushing hard in the opening meters. I gave everything to find some good feet early, but instead found myself popped and leading a small chase pack with Maik Twelsiek and another athlete in tow. Around the midway point, I surrendered lead duties to Maik and prepared for a very hard bike…
I got out of transition ahead of Maiky, pushing hard to close the 2+min. gap to the leaders, and we switch hit the pacing duties until he pulled away around mile 30 or 35. We were steadily gaining time on Ambrose and Hecht, and Maik eventually made it up and through them, but I could not match his power on the hills of the first lap. With everyone fearing the eventual appearance of Weiss, we all continued to hammer the pace. At mile 37 or so, I passed TJ Tollakson, and rode alone the rest of the day. It was a great test of solo riding, and I am happy to report that I was able to maintain good power for the duration.
After passing Ambrose only a couple miles from T2, I transitioned fast and hit the marathon course with a vengeance. My Dad was on course yelling splits, and I dug deep feeling that I could close the 3 minute gap to the lead with a great run. I felt smooth climbing the hills, and I could see Hecht after a few miles, closing the gap from 3 min. to 2:40, 2:20, and eventually down to 1:20 near the halfway point. He was running the downhills exceptionally well, and I was pulling time back on the uphills, but as I headed out between miles 13 and 14, my 1:26 half split caught up to me quickly, and I had to slow for aid. The next 10 miles were my darkest racing moments in recent memory, going way inside my mind to battle the demons and keep moving forward. TJ was closing hard and made his pass for 3rd around mile 22, but I was too empty at that point, and he was running well. With only a couple miles to go, 5th was closing hard, and I made the decision that I would not give up the place I had worked so hard for all day… I put the head down, and clicked out two downhill miles at 5:50, letting the legs fly wildly on the verge of buckling. Crossing the line brought the usual surge of emotion, mostly happiness for having finished, and to have shaved nearly 11 minutes off my time from the year before on a day that saw much harder conditions. I’m still blown away by Hecht’s gutsy performance for his first Ironman victory, and the class he showed afterwards. 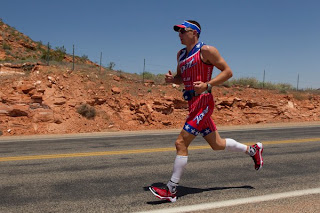 Now, with the dust settled, I look back on another memorable experience in St. George with an eagerness to return in 2012 and take the win. I could not have put together the race I did without the fantastic support I enjoy, and I must thank my family, Lynne and Bill Cobb who graciously hosted us for the long weekend, Brian Mueller for providing the perfect spring training arrangement in Tucson, and my incredible sponsors: Zoot, Specialized, Clif, Zipp/SRAM, FuelBelt, TriBike Transport, and Wattie Ink.
Next up for me will be Boise 70.3, where I will look to improve on last year’s 2nd place at one of my favorite races. Thanks for reading, and enjoy the summer!