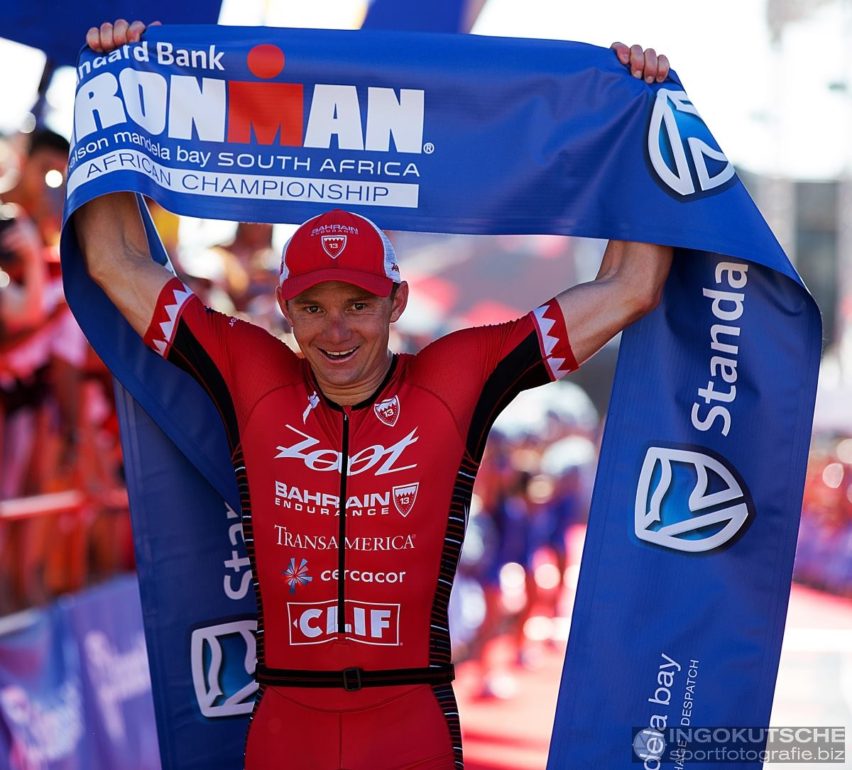 With a wonderful couple weeks slipping by already, I wanted to take a quick moment to recap my race in South Africa.

When I won the race last year, I was on a mission to prove to myself that I could execute a solid Ironman again after two disappointing races in 2015 with Texas and Kona. I was also behind the 8 ball with regard to Kona points, so I was deeply motivated and hungry to perform. When I came back this year, I was still riding some of the high of another strong race in Kona, so I had to search elsewhere for my fire. And that came from truly wanting to defend my title and set up my year very much like 2016. In two previous attempts (Lake Placid 2nd, Coeur d’Alene 3rd), I had come up short in my quest to win two in a row. Maybe it isn’t possible to demonstrate factually that a title defense is harder than the initial win, but history and my experience seems to bear it out. Regardless, I hunkered down in my winter training grounds of Tucson, Arizona, and went to work.

I really love training in the dirty T, and this winter was a good one. Sort of a renaissance for the dusty old west town this season, with more triathletes than saguaro cacti popping up all over the valley. I fed off this energy and managed to log some good volume earlier than I had the previous year. Despite feeling sluggish and a bit overdone at Buenos Aires 70.3, at the two week out mark I knew I was coming into some special form at the right time.

We all battle our demons though, and for most of us that are honest, self-doubt will almost always be one of the most insidious. Even as I churned out monster training with relative ease, the final days of taper can lead one into lethargy and questioning of ability. Fortunately, I have incredible people around me that remind me just how blind I can be in the most helpful ways, and I began to turn the doubts into belief when it mattered.

Race day came quickly, but I was ready. Kelsey and I managed the week leading in perfectly, from the huge travel over, to the sleep, eating, and even the enjoyment of where we were. Port Elizabeth is one of the most welcoming venues for an Ironman event that I have witnessed.

I warmed up, I focused on my plan, and I walked to the starting corral with the other professionals. The sun was rising over the Indian Ocean, the sounds of traditional African drumming intensifying during the countdown…

The swim was rough to begin and there was some chop, but I made sure to do everything necessary to be in the front group. After last year’s sub-par swim, I wanted to start my day without needing to chase as hard. I knew Josh would attack the swim, so I didn’t worry when I could see someone gradually pulling away from our pack. I stayed in control and exited in 49 minutes, alongside all the major contenders.

Onto the bike I let a couple other athletes dictate our pace as Cameron Wurf began his assault out front. Within 10k, I moved to the front and pushed the pace some, bridging up to Josh and continuing on the front to the first turnaround. I’m not one to focus on the other athletes too much, but at this point I made the turn and saw the big pack sitting behind me. I temporarily lost focus on my race as I lamented the close pack riding that was going on in the group, but within another 15k, I broke away with Josh and Nils in pursuit of the front of the race. I did not prepare for 3 months to sit in a group and play cat and mouse all day, and I knew my fitness was deep enough to leave the others and build some time. After all, the goal was to defend the race honorably, not sit and wait.

When Nils and I rolled into T2, we were less than 2 minutes down, and we took off in pursuit of the lead. By the first 5k we had moved past Cameron, and I was slowly opening a gap on Nils. I found my rhythm and settled in without worrying too much about the others. It was my race to win or lose, and I fed off the energy of the crowds and called on my training to carry me forward. To be honest, I felt in control all day, awaiting the dreaded onset of pain and heavy fatigue, but it never really came. I conserved a little from 34-38k, then hit it again to finish strong. The incredible rush of turning the corner onto the carpet and hearing the announcers call out my sub-8 finishing time sent a jolt of euphoria through my system, and I took a few long moments to soak it all in. A big investment for a massive return, I had defended the title and done so in record time.

Looking back now, I am excited by the possibilities of this season. Once again I am in complete control of my time leading into Kona, and I feel on track to make another step forward in October. I have to say a tremendous Thank You to all my supporters, and all of my sponsors that make this all possible: Zoot, Bahrain Endurance 13, Transamerica, Specialized, Clif Bar, Cercacor, Ice Friction, Infinite Chimp, Tender Belly, and Oakley.

Follow along on my social media for updates this summer as we hit the road in our Airstream and get married in May!